Along with Paris, Rome is one of my favorite cities so far. This was my second visit to Rome. The previous one was a short one, during an InterRail excursion a decade ago. Me and my wife decided to go there for our honey moon and this is just a journal of our time to the Eternal City. I’ve also tried to visit all the “Angels & Demons” sights and see them first-hand. So there will be an A&D post for sure in the near future. Our time of visit was end July – beginning of August 2010.

Early in the morning caught our flight from SKG to FCO with Alitalia (they offered a drink and a snack to eat) – Got the Leonardo express (14 EPP) and in 30 minutes we reached the Roma Termini – Metro line B was out causing a little chaos in the bus terminals around – Check in – Visited the Castel Sant’Angelo and in particular: il Passeto (luckily since it was only open 10:30 to 11:30 am), walked through the castle and its museum halls (unfortunately no English translations available at the exhibits), terrace (nice view) – Short walk to the St. Peter’s plaza – Then headed east to Piazza del Popolo, Porta Del Popolo (Bernini) and Santa Maria del Popolo [1]: highlights there are the Cappela Chigi (Raphael’s & Bernini’s work) with the kneeling skeleton and the two Caravagios – Evening walk @ Via del Corso, Via Condotti, Piazza di Spagna and Scalinata, Fontana di Trevi and Piazza Barberini with Bernini’s Triton fountain. 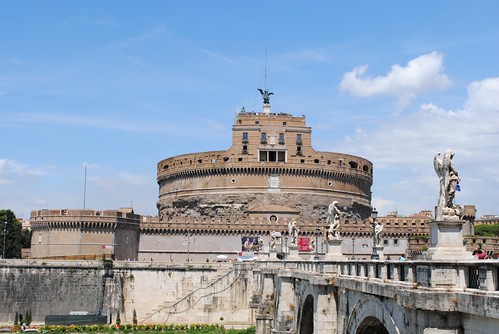 Colosseum (the 1.5 EPP booking online ticket fee saved us a lot of queue waiting time so I would recommend it) – Palatino: Museums, Stadio, Casa di Livia, Casa de Augusto, Roman Huts (not as exhiting as the Colosseum) – Roman Forum walk through the Via Sacra and Via dei Fori Imperialli (must have A LOT of imagination) – il Vittoriano: took the elevator to the top (kind of expensive with 7 EPP, but the view is really nice, personally I prefer it even from the St. Peter’s Dome since it is more in the middle of Rome than aside) – Piazza Venezia and Chiesa di St. Marco [2] (worth the “offerte” for lighting the golden mosaic) – Capitolium: Piazza and Musei Capitolini – Walk towards Theatre of Marcellus, Santa Maria Cosmedin with its Boca de la Verita (took a picture from the side, since it was not open at that time), the Broken bridge and Isola de Tiberina – At that time the clouds started gathering so we turned back to Circo Massimo where we took the metro back to the hotel after grabbing some take away food for dinner – The most tiresome day that put our legs to test, but at least it was worth it. 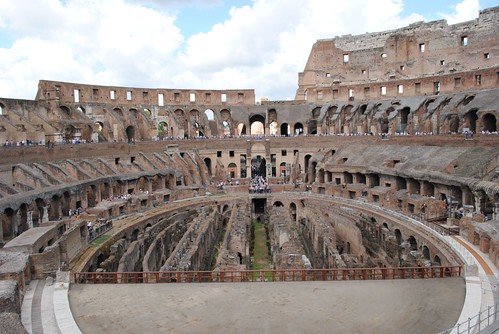 Musei Vaticani (like in the Colosseum, the extra 4EPP for reserving the tickets online are worth it): just looked for the basic attractions in Pinacoteca, Museo pio Clementino, Gregoriano Egizio, Degli Arazi, Geographice, Stanze di Rafaello and Cappella Sistina – From piazza St. Pietro we entered the St. Peter’s Basilica [3], then the Dome, “Cuppola” in Italian, (elevator costs 7EPP) and finally then the Vatican Grotoes (for free) – The nice thing about going alone instead of being in a group is that you can take your time. Actually we stayed just in the Basilica for two hours – Back to the hotel… – In the evening a small trip to the Scalinata and Fontana di Trevi. 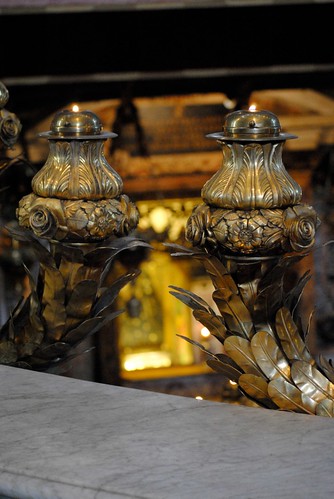 Plazza Barberini, Santa Maria della Vitoria [4] with its Theresa in Ecstasy sculpture by Bernini, Via Veneto, Santa Maria dei Concicione [5] and Crypto dei Cappucini (kind of kreepy, their motto: “What you are we used to be. What we are you will be” – In Via Veneto the coffee was expensive (5EPP) and we experienced some bad attitude from the waiters, unfitting for “want to stay famous” caffes – Walk in the park of Villa Borghese – Caught the nice view towards Piazza del Popolo – Sat in Caffe Rosati for ice coffee like proposed in AD (I bet Dan Brown has not visited Greece) for 7EPP – Headed towards Piazza de la Rotonda, the Pantheon, Piazza de la Minerva and the Elephantino obelisk, Santa Maria Dela Minerva [6] – Looked for the Caravagios @ St. Augustino [7] and St. Francesi [8] that were advertised in public spots all over Rome – Later Piazza Navona and Agnes in Agony [9] – Got some rest and went to eat – Grabbed an ice cream from the Old Bridge – Admire St. Peter’s piazza and Basilica at night until 11:00 pm, when they close it – Returned to the hotel after a quick walk at Bernini’s bridge in front of Castel Sant Angelo. 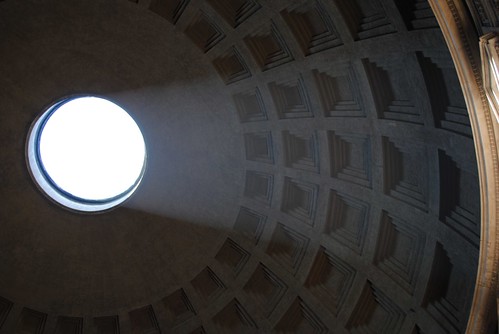 Walking and shopping in Rome’s center – At afternoon, our attempt to locate Trastevere with no guide ends up in disaster, since we end up at Trastevere train station, which has nothing to do with the “cool” place in Rome – In between we saw the Pyramide and another view of Rome not so “historic”, but rather “urbanic” – Grabbed something to eat and returned to the hotel – After getting a good rest from the afternoon’s painful to the legs mistake, we relocated Trastevere, and went there on foot by the Tiber (pass four bridges heading south after Ponte Sant’Angelo and you will find it before Isola Tiberina on the west side of “Tiveris”) – @Trastevere: Santa Maria dei Trastevere [10], Piazza Trastevere, sat down to eat, searched for two Lonely Planet’s proposed gellateries but both were closed since it was kind of late – Went back again on foot, which we kind of regretted it since we felt kind of threatened in a situation. At least we got some nice night pictures with long exposure times. 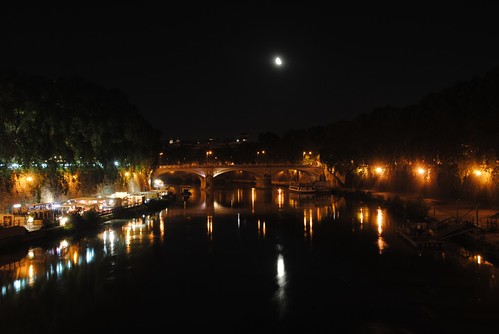 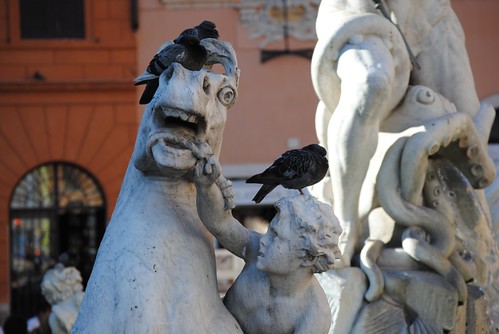 A small collection of my photos from Rome and the Vatican City.

An expensive city (food, drink, museums). For our budget, we had to put some effort to think and search where to eat or drink, maintaining a good quality-to-money ratio. But I guess this is difficult for everything and everywhere nowadays. The coffee is not so cheap, as people often believe in Greece, especially in the caffes at the historic center. Kind of difficult though for the “average” tourist to see the attractions and have in his or her mind, where to eat “smart”: cheap enough and good enough. Personally, I prefer the pizzas and the freddo cappucino like made in Greece. Filled pasta was good (same for the lasagna) but the other kinds of pasta were too “al dente” for our tastes. Gellato was just great!!! Our personal favor was “Old Bridge” where we went three times. Fistacio there is just great. But beware, there are places where one can pay 5EPP (for example we spotted one such place at the Fontana di Trevi area) for an ice cream smaller than in places where you pay 1,5EPP for the same quantity.